In our last update on “Battlecast Illaoi” (final name still TBD), we were pretty close to locking in the final look for the skin. Now it’s time to start transferring that concept into the game. The first step in this process is to build a 3D model of the concept art, which we can then use to build-out her kit.

Once the concept was nearly finalized, we took a look at it from a 3D perspective and made some adjustments for readability both in shapes and colors.

We got rid of the white paint markings both on her arm guard and the robot head because they were starting to read as highlights and were causing some confusion. We consolidated the materials, brightened up the head, hair, and goggles, and cooled off the greens that were fabrics (the leather greens are warmer).

For the moment, we removed the markings from her face because it looked too much like she had two sets of eyes. We’re considering adding them back in, but making them read correctly will be a finesse touch that’s usually saved until the end of development. We’ll continue exploring other possibilities as we move forward! :D

When we start the modeling process for the skin, we’re restricted to using the base rig, or the skeleton for the champion. We started off by taking the old Illaoi model and ripping out parts to build a base body for the new skin. We began this process before the concept was locked-in because it can take a long time. We couldn’t start working on everything for the skin though, so we started off by modeling the parts we were most likely to keep.

A super rough model with proxy unwraps and proxy texture in game.

Creating a basic model allowed us to see how things like her hair and armor will read game. We also checked to make sure all the joints were aligned in the rig (especially her fingers). Then we cleaned up the geometry and started building out the shape of the model.

Model progression from base Illaoi to the foundation for “Battlecast” Illaoi

Creating even a basic model like this one takes a lot of time and goes through many progressions, but since it’ll determine how she moves and looks in game, it’s extremely important to have a solid base to build the skin on.

Once the model was done, we set up her smoothing groups, which will take her from a blocky model to something more refined for in game. Afterwards, we did what’s called an “ambient occlusion bake,” which is how we start building-out textures. Textures are 2D images that wrap around the model and bring it to life with vibrant colors and details—for example, you see this in fabrics, such as cloth, leather, and gold.

This is the work-in-progress texture map where we edit the materials and colors that’ll be placed on top of the character model.

Once the ambient occlusion bake was done and the concept art was finalized, it was time to start adding colors and details. The first step in this is to add some flat colors on a Hard Light layer, which is a base layer of color we can then add more details to. We like to use a Hard Light layer because it can really bring out the colors and make them richer.

Next, we added some quick lighting on an overlay with a big soft brush and added another overlay layer with a darker color.

Detailing the fire base layer, the Hard Light layer, and overlay layer with a gradient from top to bottom.

Then we started painting to match the concept! The first shot didn’t look quite like Illaoi, so we pivoted a little and tried to bring her skin tone and features closer to her base skin.

Our first paintover was a little off, so we adjusted her skin tone to be closer to base Illaoi.

At this stage, we’re guessing how the painted skin will look in game because the models are idle (but in-game, champions are always moving). Once we got her in game and running around, we could really see what’s working and what isn’t.

Even though the model is in the texturing phase, we are still going to make adjustments as needed.

While we’ve been working on locking down the concept and modeling, we’ve also been thinking about what we’re going to do with Illaoi’s kit.

We do this in a “blue sky” meeting, which is where we can pitch anything. Nothing is off the table. You want Illaoi’s totem to be Velkoz’s head? Blue sky is where you get to pitch it.

Once we established that Illaoi’s E (Test of Spirit) is “Weird as f**k,” we were good to start. Here are some highlights from the blue sky meeting:

These are just a few of the ideas we had and, unfortunately, most will not make the cut. Some won’t work in the game, others are maybe too absurd, and some are out of scope for the skin.

By our next update, we should have a better idea of what her kit will look like and we’ll have started to build out her abilities. 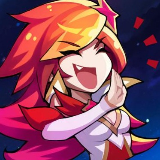