Hey folks — RiotBatty here, one of the folks working on the League Fan Art Showcase. I wanted to take a moment to explain some of our thoughts around the Showcase and what exactly it is meant to be. The League Fan Art Showcase is a small R&D project developed by a handful of Rioters. We built it as a sort of passion project, and as such it’s something that will change, evolve, and grow as we figure out how best to make it work. Basically we wanted to build an awesome platform for showcasing community artwork, and this is a first stab at getting it up and running.

The Showcase doesn’t have any big, giant, official goal. Mostly, we just wanted to create a sort of central hub for showcasing and celebrating the awesome work of League community artists. We noticed that there doesn’t seem to be a global, curated gallery of fan art (most platforms are region-specific), so we figured we’d just make one ourselves. It’s about putting all the best League art in one easy-to-navigate space, regardless of where that art came from. In other words, we want to put the spotlight on community artists in a way that makes awesome League art accessible to anyone who might want to check it out.

We’re aware that different people have different interpretations of what’s “good” and what’s “incredible.” When determining whether art becomes part of the Showcase, we’ll be considering a few factors beyond pure visual appeal. Stuff like:

Admittedly, these are subjective calls. We’ve built our (initial) baseline by observing what tends to work in places like the boards and on other platforms — high-fidelity work draws a higher response rate, for example — but we’ll be evolving that baseline by listening to your feedback and your suggestions. We’re also implementing two voting systems that enable you to influence the Showcase: a global voting system for adding new pieces to the Showcase, and ongoing, time-limited contests. One of these two voting systems will be online at all times, with contests replacing the global vote while active.

These systems aren’t finalized. In fact, we really need your help and feedback to improve on them and make sure they serve the community as well as possible. In the meantime, we’ll try to be as communicative as possible as to what’s being added and why.

The League Fan Art Showcase isn’t finished. In many ways, what you’ll be exploring today is a first draft. We took on this project because it felt fun, and because we think it will help resolve some pain points we’ve seen in the community art realm (disconnected regions, ease of finding cool art and artists, etc.), but we also wanted to get it out the door so people could start playing with it rather than focus on making it shiny and perfect. As we move the Showcase forward, we’ll be making incremental improvements based on your feedback and whether we feel like it’s delivering on the promise of its idea.

The Showcase is meant to be a tribute to the hard work of the community, but it’s entirely up to you if you want your work shown. We’ll reach out to every artist we add to the Showcase before using their work, and art will always be credited to the original artist.

We’ll also be embedding artist spotlight articles into the Showcase (starting next week). Hopefully these spotlights help provide even more context as to why specific pieces/artists were chosen.

Thanks for helping to make League’s art community one of the most vibrant in the world. We hope the League Fan Art Showcase can live up to the work you folks do every day, and we’re ready to listen to how you think we can make it so. 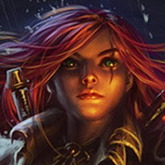