When we start a new champion, we first create a core concept. This involves a team with at least an artist, writer, and gameplay designer working together to identify things like gameplay niche, unique visual appearance, personality, place in the world etc.

After that, we need to get the character in game as soon as we can to start testing out the ideas we have — abilities, goals for strengths and weaknesses, solutions for expected technical problems, etc. Things don’t always work out as predicted though; testing, with a lot of trial and error, is really important. Occasionally, abilities from the original concept for a champion work exactly as hoped and stay on their kit throughout development. More often though, a champion will go through dozens of abilities (or at least variations on abilities) before we settle on their final kit.

Since we’re frequently testing and discarding ideas, we don’t want to make new art for every ability that seems promising. It would take a lot of artist time — for experiments that are often tossed after just a few days. As a result we use what we call placeholder art, where we take character models, spell visual effects, sounds, etc. from other champions and then modify them to make new champion prototypes.

Good prototypes have a number of qualities. They’re distinct (e.g. you know it’s a new champion at a glance when you first see them come out of fog of war). They’re representative of the gameplay we’re building for the new champion (e.g. use of Alistar as a placeholder suggests a really tanky, dangerous-when-close-to-you champion, so he wouldn’t by default be a good choice for a squishy long ranged mage). Finally they should also be evocative, capturing at least some of the feeling of the champion we’re trying to make. Prototypes that evoke the appropriate vibe and personality result in better playtest feedback and help the team developing the champion get — and stay — on the same page. Ideally a Lulu prototype would still feel whimsical and cute, a Zed one intimidating and deadly, a Braum one helpful and friendly, etc.

So, now that we’ve talked about the theory a bit let’s take a look at some champions during their prototype phases, both in terms of how we represented them originally and how some of their abilities changed.

We spent quite a while concepting different possible Mega Gnar forms, trying out ones inspired by a range of creatures like dinosaurs, rhinos, lions etc. before eventually settling on the gorilla-esque one you see above. It’s pretty close to the final Gnar we shipped, too, changing little in development (which isn’t always the case).

For quite a few months, however, Gnar looked pretty different in our playtests as we figured out his kit. Here’s a look at his prototype mid development:

And for Mega Gnar:

Finally, let’s take a look at a few abilities that were on the kit at this point mid development that changed.

When we began working on Rek’Sai, we started with a feeling we wanted to capture: ‘landshark’, with the champion initially called ‘Burrower’ as a placeholder name. Basically a beastial predator that lurked beneath you, driven by cunning and instinct. We hadn’t figured out backstory, personality, gender, or other details at this point, but knew that feeling was really the core of what we wanted to make.

For playtesting we needed two really different models for the two forms. This was to ensure it was always extremely clear which state Burrower was in, given that how you’d play around each should be pretty different. We didn’t have any champion models available that were a particularly good match for shark, though. The solution? Borrow from a skin that was in development at the time.

Void Fizz’s shark hit on pretty much all the notes we were after. It looked dangerous, powerful, animalistic, and for an extra bonus even already had the void thing going on. So, we took a copy of it, rotated it so it was horizontal, resized it a bit, and gave it a few basic animations. We figured it’d look a bit rough, but would capture the powerful predator feeling we were after. For the unburrowed form, we used a purple Kha’Zix.

So yeah, the shark didn’t exactly work out as planned. It was super clear which form burrower was in, so we got that right. But the shark itself looked pretty goofy as it swam around at a much smaller size chewing on the dirt. It didn’t hit on the emotional notes we were after, though it did at least offer some amusement in playtests. I must admit we were a little sad to see it go when we finally got the proper model in.

Looking at Rek’Sai’s kit, a couple of things were on there right from the start: Tremor Sense and Tunnels. For the tunnels we used Thresh lanterns as a placeholder, since they had all the correct associations for how the ability worked (‘I click this thing and it moves me’).

When we first started Rek’Sai’s development, we were pretty sure we also wanted to do some form of stealth (Evelynn-style perhaps) on the burrowed form, to really play up the contrast between the two different states. It became apparent really quickly, though, that with stealth on there the kit had way too much going on.

Most of the rest of Rek’Sai’s kit was still in flux at this point, as shown above. One of the more notable changes is that the burrowed Q was originally a passthrough dash like Fizz’s Q. However, once the tunnels were on the kit and functioning properly it became apparent those were all the in-combat mobility Rek’Sai would need. Another notable difference was that the unburrow was at this point just a form swap, not a knock-up, while the ult was a combination of knock-up and slow-moving stealth+untargetability. We concluded the knock-up was a good fit, but should be on a basic ability instead and that, even on an ult, it wasn’t appropriate to have stealth or untargetability on Rek’Sai.

A Mashup of Rough Kled art

Our starting point with Kled was ‘light cavalry’. We wanted someone on a mount who felt really quick and nimble, in contrast a bit with Sejuani (and to a lesser extent Hecarim). We used a miniature pink Hecarim as the initial placeholder — it was really clear it wasn’t normal Hecarim, and we figured the recolor plus mini size should capture some of the desired feel (nimble, cute, not too serious).

Thought that prototype hit its clarity goals, it felt really flat in terms of personality. This was particularly noticeable when we solicited feedback from people outside of the team working on Kled. It wasn’t clear exactly what sort of vibe we were going for, or what the core of the concept was. We had this vision of Kled as a crazy, kinda goofy character riding a cute mount, but that wasn’t coming through at all.

We were already using Gnar as the placeholder model for the dismounted form though, so eventually the idea came up — could we just bind two champion models together to simulate what we were planning to do? We hadn’t done so previously, but did have the ability to tie one unit to another (first in-game example of that: Syndra’s spheres that follow her but aren’t dependent on her facing for their own orientation).

Result was, yeah, we could bind two models together and, at least in this case, having both of them just play their animations looked surprisingly good. Gnar running above Hecarim running looks pretty close to a riding animation and the two of them attacking at the same time felt natural enough too. Some of the emotes got a bit disconnected, but the dance happened to sync up wonderfully. Feedback and excitement for Kled improved dramatically once we got that revised placeholder model in.

At this point Kled’s abilities were still going through a lot of change. His passive and E were the same as the final kit. His Q, on the other hand, was a pretty different ability, some of which ended up on his eventual W (flurry of melee hits). His W was a ranged immediate AOE hard CC, which testing showed wasn’t a good fit. Finally, for this version, his ult was an exact copy/paste of Riven’s ult ‘Blade of the Exile/Wind Slash’. That wasn’t because we thought we’d want to ship something just like Riven’s ult, but because we wanted to get some testing on the rest of his kit and therefore needed a temporary ultimate to ensure he functioned well enough in-game (rather than falling off a cliff in terms of effectiveness post level 6 trying to fight people with ults without having one himself).

Wrap Up (and Bard out-take)

So, that’s a look at both a bit of how we prototype champions and how a few of them had different abilities partway through their development. Hopefully, it’s been an interesting peek at how some of the development process goes. To end, let’s look at one more video that’s a little different. This is Bard during his development at a point where we were going for a pied piper/Pikmin inspired approach to Meeps, where a line of them would follow Bard around constantly, potentially getting to around eight meeps by the end of the game. Something the designer working on Bard realized, though, was that by changing a single line of code we could create a really cool effect as below. It’s not something we ever thought about shipping (way too much stuff on screen at the same time for a single champion), but it was cool to play around with and we figured you folks might enjoy a quick look at it as a result. 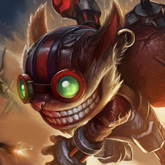 The Finals Experience at LA Live