The wheel of the year has brought us quickly to autumn (or spring depending on which part of the globe you’re from). Our focus this year has been on developing and delivering more stories about the people and places of Runeterra. Now that one of those projects is about to hit shelves (more on that later, I promise), it feels like a good time to talk about what has been guiding our narrative approach lately.

If 2018 was focused on understanding the physical relationship of locations within Runeterra with the introduction of the map, 2019 has been about building on those relationships through characters and connection. Though these examples are from core Runeterra lore, this approach applies equally to how we think about our alternate universes as well (which has been especially top of mind for me personally with Star Guardians…).

Start with the Sparkle

As some of you may remember, narrative folk love a good hook like a raven loves a shiny bit of tin foil. A small snippet of dialogue, a brief description of something in between action moments, or a subtle “what if” are all treasured gateways to rich story lands of possibility. Truth be told, we often build them into our stories as a way to be kind to our future selves. When we’re staring at the infernally blinking cursor in the vast white space of an empty text file, those shiny bits can be a lifeline.

Even though Runeterra is a fantasy world, we want that world to feel as deep and believable as our “real” one. The roster of champions is always growing, and for 2019 we focused our storytelling towards expanding on some of those questions we’d left open in previous years while giving homes to our new or recently refreshed champions.

The Places In Between

Often times the sparkly question to explore exists between two previously defined narrative points. Earlier this year, we were asked to help define a new region in the world, and we found it physically sat in one of those in-between places in Runeterra. When we charted out the map of Runeterra, we chose to concentrate on the continents of Valoran, Shurima, and Ionia. We purposefully left unclaimed territories between regions so that we could expand and build on them later.

In the south-eastern half of the Shuriman continent lies one of those unclaimed territories, and  we knew there were a few champions who could call that region home. The development of the interactive map coincided with the development of Ezreal, Neeko, and Qiyana, all who came to that unclaimed space with different points of view that helped shape and define that area into the region now known as Ixtal.

Brimming with an explorer’s curiosity, Ezreal became our proxy, giving voice to the questions that bridged our at-the-time understanding of Runeterra with this unknown land. Who lived there? Where did they come from? What did they know? Bordered by Shurima, the Shadow Isles, and Icathia, this land had weathered magical destruction, and yet remained lush and green. Why? Through Neeko’s wide eyes and chameleon-like ability to take on the form of another, we were able to explore the present-day people of known regions trying to make a home here. However, it was through Qiyana’s development that we got to live within the culture that had outlasted Azir’s empire. Her point of view gave us the pride of a people who had helped shape the sun discs, witnessed the fall of the Blessed Isles, and survived the ravages of both the Void and the darkin.

Someone Old, Something New

When working on a full visual-gameplay update for a champion, we often decide to reinterpret that champion’s narrative. Our goal is to bring them more in-line with our modern understanding of Runeterra and offer connections to champions who might not have existed at the time of their launch. In those situations, the shiny narrative questions we gravitate toward are often focused on how we can best interpret the emotional meta of a character—in other words, what about this character is important to those who engage deeply with them.

However, with last year’s update of Akali, we had a chance to dig into a modern understanding of Akali within the Kinkou. Instead of taking Akali down to a blank slate and starting over, we were able to preserve who she was and move her forward in her story. Her core as a Kinkou assassin served as a stable base to build on, allowing us to move both her and the Kinkou forward as they question what is to become of Ionia in the aftermath of the Noxian invasion.

We found a similar opportunity with Pantheon this year.

Before the update we had told a story around Atreus, the man whose mortal body had been taken over by the Aspect of War. Many who read the story of Atreus’ struggle were conflicted. A supreme celestial entity could now walk the earth to fight darkness, but what happened to the man inside—what happened to Atreus? This is a very sparkly question and ended up driving a very different redevelopment for Pantheon. Instead of reinventing the character inside with a new incarnation of the Aspect, Pantheon’s rework doubled down on the qualities that are truly worthy of god-like power in the first place. The resiliency and grit that pushed Atreus to the top of Mount Targon is the same quality that allows him to stand back up after the celestial within was defeated.

Sometimes building the world is not about continuing one person’s story, but weaving several people’s stories together. During the early development of Sylas, we knew we wanted to expand our understanding of Demacia into a more three-dimensional place. For many years in Runeterra’s development, Demacia had often been oversimplified as the morally “good” region to Noxus’ “bad.” Through Swain’s rework in early 2018, we know Noxus to be much more complex than that. We hoped that through Sylas, we could similarly add more nuance to Demacia.

Sylas as a character built on the question of what could happen when a culture oppresses a naturally occurring part of itself. These sparkly questions about Demacia’s complicated relationship to magic reverberated not only in The Unshackled’s development, but also in Kayle’s and Morgana’s reworks. These shiny bits also served to light up the development of one of our ongoing out-of-game story mediums. The Lux comic series braided many of these character threads together, tied off one thread in particular with the concrete death of Jarvan III, and sparked a new short story about Xin Zhao. We’re hoping Zed and our future comic series will provide similar runway for more connected stories across different mediums.

Questions Still on the Shelf

Within narrative, we constantly bring up and debate the little shiny bits of our world and characters. These often present as stories we’d like to tell about Runeterra, but have a hard time connecting to the more focused opportunities surrounding a specific champion launch. Also, while we’re surrounded by the digital versions of Runeterra’s stories and images on Universe, we wanted a way to hold it in our hands. Maybe I’m old school, but there’s nothing like getting lost between pages. Thankfully we’ve found a particularly sparkly solution to address both of these desires. Details on how to acquire this beautiful bundle of lore goodness will be coming very soon.

I hope this has shed a little light on how we approach and progress narrative work. We’re going to continue on this path of connecting characters to the world through story for the rest of 2019 (and beyond!). If there are any specific questions or shiny story hooks you think we should dig into, please be sure to let us know in the comments section below.

As always, thank you for spending some of your story time with us! 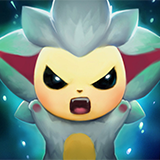 Thermal Kitten
Head of Narrative
Ariel Lawrence
When not shepherding the narrative flock and their wild imaginings of Runeterra, Ariel enjoys writing magical girls and guilt-ridden blademasters. She remains surprisingly optimistic after serving the God of War for more than ten years.
Next Article