Yo! I’m LUNCHBOY, a product manager working on everything you can personalize in Teamfight Tactics. Today I’m pumped to be talking to you about our first customizable feature in TFT—Little Legends. We’re going to break down what they are, why we made ‘em the way we did, and how you can get some of your own. We’ll also give a sneak peek into our plans for Arena skins, an upcoming feature that’ll allow you to customize your TFT board.

What Are Little Legends?

Little Legends are the cutest darn critters in all of League (sorry poros). They’re a highly-expressive and diverse bunch that’ll function as your avatar in Teamfight Tactics and cheer you on in ARAMs. TFT is a highly social game, and Little Legends are at the center of every interaction you have with other players. Your Little Legend will race opponents to nab Yasuo in the shared draft, dab on enemies after a close victory, and flash your Yikes emote after losing to a player who’s definitely high-rolling.

You’ll be able to unlock any of these (and their matching icon) for 750 RP. We’ll also be including a Little Legend Egg as a reward in the free TFT Beta Pass. After playing a few games, you’ll be able to select from the Silverwing, Runespirit, or Molediver as your starter Little Legend. (Insert Pokémon joke.)

When designing Little Legends, we were inspired by some of the feelings we had while playing TFT, and we wanted the Little Legends system to capture those same feelings. For starters, we really enjoyed the moment when you can finally upgrade that one-star Tristana you started the game with to a three-star powerhouse. This is why we wanted you to be able to evolve your Little Legends—so you can watch your humble one-star Pengu Featherknight grow into a much cooler three-star one.

We also wanted to mimic that feeling of seeing the clutch tier-5 unit you need to win in the shop, and we hope you can feel some of that same joy when you get an unexpectedly rare drop from a Little Legends egg. Finally, we hope that your Little Legends collection feels unique and special to you, just like you’re able to construct a one-of-a-kind team comp in TFT.

With all this in mind, let’s talk a bit more about the three aspects of Little Legends that’ll help us hit those goals: variants, Series Rare Eggs, and star-ups.

Variants: To bring in that feeling that comes with getting rare things, we’re launching with six variants (including the basic version) of each species. Some of these variants are rarer than others, and you don’t have to own the basic version of a species to get its rarer variants.

Each of these variants has its own unique flair and identity. For example, we all know the Ravenlord Featherknight is eagerly plotting world domination:

While the Extra Spicy Featherknight is oblivious to his inevitable demise as a tasty dinner:

These variants, and many others, will drop out of Rare Eggs that you can buy for 490 RP.

Series Rare Eggs: While we love the feeling that comes with getting rare content, we wanted to balance it with your ability to have control over what type of Little Legend you’re getting. This is why there will be two varieties of Rare Eggs you can buy at launch—the Series One Egg that can hatch Silverwings, Furyhorns, or Hauntlings, and the Series Two Egg that can hatch Runespirits, Featherknights, or Moledivers. Each egg contains six variants of each species within it, including the species’ base variant, so there are 18 total variants that can be hatched out of each egg type.

We want every egg you open to give you a new Little Legend that you can immediately take into game, so each time you open an egg, you will get an unowned Little Legends variant or a star-up for a variant you already have. Once a variant reaches three stars, it won’t hatch from any future eggs you open, so you’ll be more likely to get the remaining variants when you open more eggs from that series.

Star-Ups: Collecting multiples of the same Little Legend variant will star-up and “evolve” your Little Legend, just as collecting multiples of a champion in TFT increases their star level. If you’re familiar with how TFT works, then you’re probably thinking “3 one-stars = a two-star, and 3 two-stars = a three-star, so I’ll need 9 of the same Little Legend to get the final form.” But we think it feels better if every egg you open gives you something you can use right away, which is why each duplicate of a Little Legends variant you acquire increases its star level by one.

Every Little Legend starts as a one-star—that’s your buddy in its base form:

Once you collect two of ‘em, your Little Legend will evolve into a two-star—a more grown-up version of your pal, with an enhanced model:

And once you collect the same variant a third time, they’ll evolve once again into a three-star—the flashy final form of a Little Legend that stands apart with added VFX shine, kind of like a holographic trading card.

Each Little Legend variant stars up uniquely, meaning you can have a one-star Ravenlord Featherknight and a three-star Extra Spicy Featherknight. Leveling a Little Legend to a higher star level still gives you access to its earlier forms, so if you’re feeling like baby Lost Silverwing some days but shiny Lost Silverwing on others, you’ve got options.

In addition to the new Little Legends we’ll be delivering throughout the year, we’re also exploring ways for players to customize their personal Arena to really make that space their home. For now, there will be a few Arena skins available to earn in the free Beta Pass, but we hope to deliver more complex and differentiated Arenas in the future. These Arena skins will draw inspiration from the League multiverse, from Shurima to Star Guardian. We’d love to hear what else you’d like to customize in TFT and what you think of the first group of Little Legends, so feel free to hit us up with feedback and ideas in the comments.

We’re excited to get TFT into your hands, and I’ll be looking out for you on the ladder with my Toxic Molediver.

And with that… here’s a spread of all the Little Legends, variants, and star evolutions that will be available at launch. 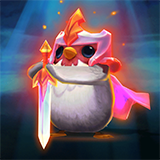 LUNCHBOY
TFT Personalization Product Owner
Dax Andrus
LUNCHBOY is a die-hard player of the autobattler genre, having once reached rank #7 on the DotA Autochess global leaderboards.
Next Article