We added the transcript below in case you’re surrounded by ferocious-but-sleeping tigers and can’t currently watch the video.

Ed “Sapmagic”: This is your ranked armor, a new evolving reward that represents your achievements and time investment in Ranked. Today, we’ll be talking about how to earn rewards in 2019, and we’ll detail our plans for the new three split season.

Hey Summoners, we’re back. I’m Ed, the lead for the Ranked team.

Sapmagic: We’re gonna start by going over the basics of how the season will unfold and then we’ll answer a bunch of questions we’ve been collecting from you via social media.

Sapmagic: Right now the season is really long. You basically play for nine months straight, and then at the end if you were good enough, we give you some rewards. A lot of players don’t get any rewards and it’s also just kind of a slog. Next year, we’re gonna break that up into three splits, so you have checkpoints to see how you’re doing and set new goals, and so that we can make larger changes to the game when necessary.

Riot Gortok: Rewards tie into splits now, also. We’re not getting rid of season rewards. Instead we’re adding new stuff you can earn by playing in each split. If you want to get the best rewards, you’re gonna need to play in all three splits. But don’t worry, if you only have time to secure a few wins per week, that should still be enough.

Sapmagic: Here’s how it works. You’ll earn Split Points by winning games over the course of the split. When you earn enough points, you’ll instantly unlock rewards you can use to show off your rank in and out of the game.

Riot Gortok: The main thing you’re gonna earn with Split Points are upgrades to your ranked armor. You earn a new upgrade during each split. Additionally, the banner draped off the back will always show last season’s rank. That means by the end of 2019 your armor will reflect your current rank, all your upgrades you’ve earned from splits during the season, and your rank from 2018. So, two seasons of your ranked journey.

Sapmagic: And one last thing about your ranked armor and banner. They’re gonna follow you to a bunch of new places including your profile, hover card, rank dashboard, loading screen, and lobby. Now you’ll always be able to remind your friends that you’ve got that shiny gold armor and they don’t. And in terms of season rewards, we’re at least going to keep the Victorious skin. We’ll talk more about what else we have planned after we kickoff the season and you’re all smoothly climbing your way to Challenger.

Sapmagic: Over the course of our dev blogs, we’ve seen a lot of your questions about splits and rewards. So we’re making some time to talk about some of the stuff you wanna know more about. Let’s dive in.

Q: Is the Victorious skin reward staying at gold?

Riot Gortok: Yeah, that’s the current plan. We thought about lowering it, but we think the exclusivity on it is pretty cool. Also, there’s kind of a historical bar that it has set which establishes what it means to be relatively good at ranked, and we don’t want to undermine those of you who got the reward in past seasons by making it cheaper and easier to get now.

Riot Gortok: At the start of the season we’re gonna do the reset just like we have every season, but when a split ends we’re not gonna do any reset at the point. That would come across as just being way too grindy. And we actually are looking for you to maybe assess your progress over the course of the season, and maybe set some new goals at that point instead.

Q: Will there be a short time off in between splits or will it just go straight to the next split?

Riot Gortok: We’re not planning to take any time off in between splits. We want to make sure that Ranked is available whenever you want to play it, and it doesn’t make sense to have long periods of downtime that would interrupt that.

Q: What happened to the Challenger recall reward?

Sapmagic: Well, it’s been a long time coming, but we can say that the Challenger recall is finally launching at the beginning of next season. The way it’s gonna work is, whenever you’re Challenger, you’ll have that recall, and we think it’s a really awesome reward type because it basically gives you bragging rights and represents your achievements in the game.

Q: Is there any payoff for hitting certain ranks in multiple positions? Could a possible five Victorious skins or extra chroma be on the table?

Sapmagic: Well the short answer is, no. But at the same time, we do want to reward players for mastering multiple positions. We think a good reward shows off your skill or is really meaningful if you play that position, but the Victorious skins don’t really do that. So we’ll be looking for ways to do that as part of season rewards and if you have ideas we’d really love to hear them.

Alright, that’s all the questions we got time for on splits and rewards, but let us know if you like this format and maybe we’ll do it again in the future. And as always, we want your feedback on our plans. Hit us up in the comments, on social media, or send your questions to Ask Riot. Thanks for playing everyone, and we’ll see you on the Rift.

For answers to even more questions—including details on how Honor affects your Ranked rewards and an update on physical rewards for Challenger—head on over to our dev blog. As always, we’re open to your feedback, so let us know what you think and hit us up with your questions in the comments. Or better yet, click the Ask Riot button below. 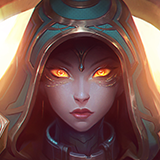 Riot Gortok
Game Designer
Primus Majda
Riot Gortok is responsible for designing all the systems that make up Ranked. He is a Sona main who reached Plat for the first time after playing League for 8 years.

Riot SapMagic
UX Lead for Teamfight Tactics
Ed Altorfer
SapMagic heads up the team working on Ranked. His favorite type of shirt (and meta) is tank tops.
Next Article