As you’ve may have noticed, we’ve recently made some changes to the old parties system. Before, parties had really rudimentary functionality: You could invite friends to join if they were eligible, you could select your positions and… that was pretty much it. It didn’t persist past a single game, it didn’t let you switch modes, and it didn’t really do a lot of things you’d expect from a group management tool in 2017.

We wanted to start moving towards a new system that better meets the quality bar for this day and age. Our hope is that by creating a more flexible system with better tools for finding and playing with friends, we can make life easier for players who enjoy playing in premades. If you prefer just playing on your own, you might not notice a lot of these upgrades and that’s okay, but our hope is that if you do play with friends, this will be a significant upgrade to your experience.

So far, we’ve made three significant changes: We’ve made parties persist between games, you can switch your map or mode without having to re-invite your party, and you can invite from the end-of-game screen. Now we’d like to shed some light on some of the pretty significant upgrades that will be rolling out over the next few months. Just as a heads up—these features are currently in various stages of production, so we’re going to use wireframes (and not final art) to help show you what’s to come.

Anyways, let’s get to the fun part: new features that’ll be rolling out throughout the first half of next year!

Add teammate to party from the end of game screen – Currently, the way you invite strangers from a game you just played to your party is by adding them as a friend and then inviting them to your lobby. We think there may be times where you want to play with the same team or even just duo for a few games without necessarily having to add anyone to your friends list. This is why we just added a button at the end-of-game screen to allow you to invite people directly to your party without having to befriend them first.

See who’s already clicked “Play Again” – We will show you which of your party members are already back in the lobby at the end-of-game screen so you can easily tell which of your friends are ready to play again!

Let anyone on your friends list join your party – We’re going to add a toggle in the party screen that lets you set your party to “open.” If you use this option, anyone who’s friends with you or anyone else in your party can join your team with just one click. No invites, no accepting requests—just click the open party and receive the bacon. Hopefully, this will help you find duos who are ready to play, form teams to complete group missions, and join premade squads a little more easily.

Parties are more flexible – There’s going to be some changes to how we handle eligibility for joining parties. Today, we check whether someone is eligible to join your party when you try to invite them, so you can’t invite a friend who’s too far from your rank to a ranked game or a brand new League player to a draft pick. This also means you’ve always had to start with exactly what you wanted to play and then decide who to play with.

The new system is much more flexible. It’ll let you invite anyone to your party, regardless of eligibility. Then you can make changes to the party or selected game mode without having to reform the party from scratch. This way, you can start with who you want to play with and decide what you want to play from there.

Quick and easy voice comms for your party – We’ve been talking about this for a while, but League Voice is finally in production. It’ll be built into the party system, so as long as you’re in a premade party, you’ll all be in the same voice room. If you’re unable to or don’t want to participate in voice comms, you’ll be able to opt out.

To answer a question that’s probably on your mind: We are currently not planning on expanding League Voice to team members outside of your premade party. Playing with friends usually makes for a safer environment than playing with strangers, and until we have better tools to help address abusive scenarios with strangers, we will not be implementing it outside of premades. We trust that between the social implications of being a jerk to your friends, being able to kick people from your party, and the capability of muting individual members, players will be equipped to deal with their ill-behaved party members.

This is just what we’re ready to share right now—we also have some more ideas in the works which we can hopefully share later. As always, it would be great to get some feedback on how we can make the party system even better! So what would you like to see? 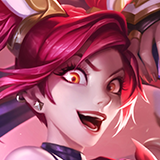 Riot Soundwave
Product Manager
Kristoffer Touborg
Riot Soundwave is a product manager who will never get out of gold, but that’s ok because it’s about the journey right?
Next Article