With Rotating Game Modes, we’re always trying to explore new spaces within the gameplay of League. Sometimes, that means taking a very narrow slice and magnifying it (like the push and pull gameplay in Dark Star: Singularity). Other times, we focus on putting what you know into a different context.

Doom Bots, and more recently “The Teemoing,” were some of our first experiments with PvE. We wanted to keep exploring this space, but also try different angles. While Doom Bots was still loosely based on Summoner’s Rift, with Star Guardian, we wanted to explore what it could mean to translate League’s basic gameplay mechanics into a more traditional “defeat the hordes of enemies” setting.

The Quest for Joy

With this idea (defeating the hordes) as a core, we sat down and discussed everything we wanted to accomplish, any challenges we needed to overcome, and some of the nitty-gritty of actually building a mode; for example, experimenting with map layouts, building revive systems, crafting monsters, and every little detail that makes Invasion the mode it is.

This was not a short list, so I want to focus here on two particular challenges that were most core to our final design:

The first thing we do when creating a mode is begin with a number of very quick prototypes to see which parts of them stick. This process is called “rapid iterative prototyping,” or “find the fun,” where the goal is to quickly search for moments of fun we can later refine and build upon. After going through a few variants, we ended up trying a prototype where you had to guide your champion across the map to an exit. Whenever you reached certain points, streams of voidlings would run at you, and sometimes there’d even be a Gromp or two.

It was, of course, untuned—and non-damage champs in particular felt very underwhelming. The support kit of Janna or Lulu feels fine in the context of Summoner’s Rift, but there wasn’t anything for them to do here. DPS champs felt good, though, so there was enough in this prototype to give us confidence moving forward.

We now had the seed of what would become Invasion.

We knew we wanted to keep the feeling of rapidly tearing through enemies from our earlier prototype. We began testing with a gray square that streamed in Voidlings and VoidSpawn from the four corners (I’d include a picture, but it’s a gray square). We still had no solution for support champions, and additionally, we struggled to make non-AoE abilities feel useful. Ahri’s Charm, among many others, felt wildly underwhelming.

Rather than crafting brand-new PvE mobs to entertain these problems, we used the existing enemy archetypes from League champions. This meant our focus was on crafting situations that would feel good to overcome with the MOBA kits each champ had, rather than try to shoehorn them into a more traditional PvE setting with dungeon mobs. This not only saved a lot of content dev time, but also gave us some advantages in learnability: When you see something brand-new, we need to teach you what it does, but when you see Vel’Koz, you have a rough idea of what he will probably do.

We wanted to mix up a few rooms even more, so we created Cho’Gath, who is a very low threat by himself but sticks around for a long time. As a result, he plays as much more of a “Map Modifier,” meaning he changes the way you think longer-term without changing too much of your moment-to-moment.

PvE often gets its variance from just having lots and lots of content, but building content can be quite time consuming. So from the beginning, our goal was to get as many unique experiences as possible out of each monster without breaking players’ knowledge of how they worked.

By this point, we knew we wanted a playthrough of the mode to be a series of different encounters. Our earliest attempts generally used every monster type and tried to generate variance via spawn pattern (for example, spawn all the enemies from the northeast corner or spawn all enemies from the west or east only). That…didn’t really work; we were getting some variance, but it was only slight, and overall the mode was feeling too flat with no real high or low points.

Instead, we decided to focus encounters on specific enemies. As we went, we found the sweet spot was generally ~two: One that defined the room, and another to back them up and add flavor.

Beyond composition, we also experimented with various objective layers for the rooms to act as differentiators. We experimented with some wilder ideas; one of our earlier prototypes involved filling a room with one-hit-kill bombs. However, we ended up settling on the three types you can see in the mode: the basic “just survive” experience, as well as “escape the hallway” and “trapped in a bubble.” We found these three played well with the enemy types we already created and were easy to learn while still achieving the different feel we were aiming for.

The “Big One” sits on her perch atop the Valoran City Planetarium.

Beyond that, we created unique rooms by having enemies employ their combat pattern in a different way. One of the clearest examples is what we like to call the “Bullet Hell Hallways”—by changing Vel’Koz to fire in a fixed pattern, rather than aiming, we were able to create multiple, clearly differentiated hallways, even though they both employed a high number of Vel’Koz…s. Vel’kozzes. Vel’Ki…?

Using all of the above, we think we were able to create enough distinct experiences to make the mode feel unique across multiple playthroughs. That said, this is a hugely subjective topic, so we’d love to hear your thoughts or any ideas you might have for building it out more in the future!

During the concept phase, we came up with a group of different ideas that would make for a cool setting for the Star Guardian PvE battle mode. Some of the initial ideas included a Star Guardian space palace, a rooftop city-style battleground, a set of ancient ruins, the inside of a school, and a planetary-themed park. From there, we gathered some references and did sketches and quick paintings to figure out which idea we wanted to go with.

At this point, we talked to some of the other teams working on Star Guardian to see what kinds of stories they were telling. We bounced around ideas about different possible scenes the battles could take place in, and settled on keeping the setting grounded on Star Guardian Lux’s home planet. The team decided to deep-dive on a park in the middle of the city. Once the general story was figured out, we started to craft the visuals to reflect that vibe.

One of our designers used to live in Japan and had some interesting ideas about incorporating traditional Japanese architecture in with the modern Tokyo-style city architecture. The result was a pretty interesting juxtaposition between the historical-looking lanterns and modern-day cityscapes. I spent some time integrating those ideas into the mood piece. The whole team got super excited about this direction, and that image even served as the temporary loading screen for most of development.

Concept art illustrating the map’s layout and how the pieces fit together.

I started work on a unified layout concept, which is where we ensure all of the art on the layout works together visually, is thematically cohesive, and illustrates visual harmony. We knew we wanted a mix of different zones the player could move through, but our short timeline meant they all had to be constructed from the same modular assets. (A modular asset is a type of art that can be repeated in a way that is interesting, like a building, bush, or tree.) The art style for the Star Guardian world was difficult to nail down at first, with its mix of real-life nods and stylized forms. In the end, we decided to keep the level of detail from League of Legends, while simplifying the major forms and silhouettes to the level of a classic anime style.

Concept Art for the Lake Area

Collaborating closely with game design involves moving and iterating fast. They often start with very rough 2D maps for early testing, but those quickly lose value as we move further into the project because of the rapid rate of change. “Grey-boxing” is a great way to rapidly collaborate with game designers without slowing them down. We can get a feel for the gameplay space without spending too much time refining details on 3D models we might not use.

Jeremy “Redondo” Page spent a few days blocking out all of the geometry on the map, which let us begin playtesting on something more indicative of the final experience. For instance, we quickly realized the city would have to sit much lower than the playspace in order to show up nicely from League’s camera angle.

Grey Box Models for the Map

With the world coming into focus, we began refining the flavor props and POIs (points of interest) we’d need to give the world a unique feeling and make the environment more immersive. This includes bits like the playground pieces, fountains, and ground details. It’s a collaborative effort where we often alternate between updating things in-game then painting over the screenshots to quickly solve problems we spot, such as bad composition, harsh lines, and textures that don’t make any sense.

Paintover Illustrating the Art Direction for the Upper Periphery Area
Concept art for the various props to add life and detail to the world.

Once the props that make up the world started to come together, we noticed the ground felt really empty. We decided to set up the same tech we used on Summoner’s Rift, where we can fully customize the whole gameplay area. This allows us to essentially create a custom painting for everyone to play on! Our 3D artist Ayhan “Ayhankin” Aydogan went to town dressing up the whole map and bringing all the details of the park to life. He added piles of blown leaves, lush grass, patches of dirt, subtle lighting effects, and more to really make the place feel alive.

The game mode isn’t just a map though—we needed some enemies! The designers found the monsters who had powers they wanted to borrow, and we were presented with the challenge of making them feel like one singular species of aliens. We unified their color palette and gave them a shared alien-green emissive glow to bring the looks of the creatures together. From there, we relied on some differences in hue, scale, silhouette, and movement to make sure the monsters didn’t become too hard to distinguish from one another. The result was a set of new “space aliens” that fit together visually without needing to make nine entirely new characters!

Working on Star Guardian was a super fun experience and makes us super amped about what we might create in the future. We hope you guys enjoy it! 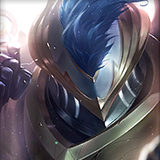 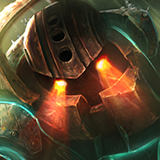 Sharkcromancer
Senior Environment Concept Artist
David Harrington
Sharkcromancer is the concept artist for the maps and modes team. He likes long watch on the beach and undead shark monsters.
Next Article

2017 Rift Rivals By The Numbers