Over the years there’s been things we would and wouldn’t do in game modes for League of Legends. In 2017, we’re interested in breaking some of those expectations and seeing how far we can push gameplay while still retaining the fun essence of regular League.

Our most recent game mode Dark Star: Singularity is the furthest departure from standard League gameplay we’ve ever tried. We’re super excited about the space (see what I did there), but being this far from home brings with it some new problems to solve.

We’re going to dive a little deeper into some of the challenges faced by both Design and Art when crafting the latest mode, and why we chose to solve them in the ways we did.

League of Legends is sort of like a great big toybox. Each character is an awesome action figure, and everybody has their favorites. In previous years, we didn’t want to take away any of those toys. Every mode had to let players play their favorite champion, and we focused on trying to change the play experience while dealing with this constraint. This limited us to only being able to provide certain kinds of experiences: Ones where ranged attackers, support casters, and tanky bruisers all had a place.

This year, we decided to drop that requirement and see where it led us. The first experiment was Hunt of the Blood Moon, where we limited the champion pool to a subset of agile, bursty, “assassin-y” champions, and built a gameplay experience that was really suited to their strengths.

This time, with Dark Star: Singularity, we decided to take one toy out of the toybox and build a playset for him. We ended up picking Thresh, an iconic champion with an iconic kit, as our first subject. Largely, this was because his abilities have a lot of what I’d call kinetic fun – it just feels so good to throw that hook and watch the impact as it lands. The objective was to make a mode that showcased what was most exciting about playing Thresh, and to provide a map and a set of rules well-suited to his abilities.

The objective was to have fast, “arcadey” gameplay, which means getting straight into the action. In this case, we decided to remove gold, levels, and items entirely, and to just focus on Thresh’s three core abilities, which we powered up and tweaked. We kept health, but changed its meaning – instead of dying when your health hits zero, you are instead more vulnerable to being flung into the Dark Star. This meant skillful play could win any encounter, even if you were at 1 HP.

Having removed as much as we could, we started adding things back. We work under a complexity budget for new elements, since our modes are ideally very pick-up-and-play and we don’t want players to feel overwhelmed. To this point, and to make the mode feel as “Thresh-y” as possible, we didn’t change or add any inputs – meaning, your attacks and abilities all do the same things, just moreso. Instead, we added new elements and rules to change the outputs of those abilities.

Ideally, each new element should serve multiple gameplay purposes, to get the biggest return on the added complexity of including something new. Abyss Scuttlers act as dynamic cover, as free points if the enemy is just hiding, and as a catch-up opportunity for a struggling team. Gravity Anchors serve as reliable movement around the map, as “terrain” that blocks hooks, and as a way to rescue yourself from certain death. Health Crystals are something strategic to fight over, provide a new objective for low-health Threshes (Thresh-i?), and open up more teamplay opportunities.

In creating the mode, Design and Art had to work closely together. The core gameplay of the mode emerged from an idea sparked by a visual thematic pitch – one of our team’s artists suggested using Dark Star Thresh, and I immediately had a vision of how awesome it would be to toss an unwilling enemy into a black hole and watch them disintegrate. It wasn’t long before we had a working prototype of the mode, and a hand-drawn skeleton of a map in-game.

Isn’t it beautiful? I like the walls the best.

As a designer, as soon as I’d shown that the gameplay could be fun, my next focus was to lock down the map layout as soon as possible. This was because the environment artists were going to have to take my weird gray pancake and turn it into a believable hunk of space rock, and that was going to take time. Through a lot of iteration and playtest (I’d never done map design before!), we arrived at this final layout based on the north base of Summoner’s Rift.

I think it looks like a surprised, balding, bearded swami

Early on in the gameplay prototype process we realized this mode would work best in some sort of close-quarters arena. Our only existing map that had the general shapes we were looking for was Dominion, but it didn’t fit the theme at all. Jeremy “Redondo” Page and I were the only two artists on this project and we had a target timeline of two months; skinning all of Dominion felt like an overly ambitious plan. If were were essentially going to build a map from the ground up anyways, the scale of Singularity made it the perfect excuse to try making a brand new map!

At this point Luke was still iterating on the map layout from a gameplay perspective, so we focused on building the overall feel we wanted. The core idea we locked onto was that you’d be floating in space on some sort of shattered rocky platform. We loved the parallax a viewer would see when they peered at the stars through cracks in the playspace, the desolate space vibe perfectly fit Dark Star, and we were hoping the rocky terrain would let us get away without having to build too many custom assets!

Though our team was tiny, we reached out for help from Rioters around us who were equally pumped for Dark Star! We even got ahold of Grace Liu, an ex-rioter from the Summoner’s Rift update team, to help us with concepts for the map!

First concept: Can you spot the easter egg we ended up using?

We were certainly on the right track with this line of thinking, but the battleground felt pretty forgettable. Why should someone care about this random amalgamation of rock? What was the story behind it? I was chatting with some other folks on the team about this problem when it hit me; why smash some random rocks together when we have the fantastic rocks of Summoner’s Rift instead? Skin lines represent alternate fantasies for the world, and the idea of a stripped-down base ripped into deep space fit the thematic perfectly. In my mind the energy of the Nexus had collapsed into a small Dark Star, and barely held this small plot of ruined land together. I spent a few minutes in Photoshop whipping up the beauty below.

Concept paintover: The ‘artist’ in Tech Artist can sometimes be misleading

Luckily for us Grace could translate that idea into something that didn’t hurt everyone’s eyes. It still felt like ruined space rocks, but now it had that extra layer of personality and storytelling that got the team pumped! Just having a visually compelling map was no good though, so we tossed this over to Luke to get his thoughts. He liked the idea, and took the extra time to update his prototype’s play area to roughly match the base’s size and layout. (see his section above)

Now began a delicate balancing act between Jeremy and Luke. We didn’t have much time, so Jeremy dove right into production of the actual 3D assets for the map, but we still didn’t know exactly where everything was going to go in the final version. So art started with smaller reusable/flexible pieces that we could use as building blocks and jammed on those until we ran out of stuff to do.

We wanted to throw away as little work as possible (shocking), so art and design took some time to agree on which areas were least likely to change. We then focused on assembling the previous bits we’d built into these larger set pieces. Even so, we ended up having to do a lot of mid flight changes as playtests revealed that large brushes sucked, that the position of Gravity Anchor in the top right made it too defensible, and the like.

Playtest footage on the blocked out map including space noodle cracks and hook posts!

Now I said our team only had two artists on it including me, but we got an immense amount of help from other people around Riot who wanted to help us deliver something awesome. Folks from around the company took time out of their normal work and chipped in days or weeks to help whip up things our team wasn’t able to do ourselves. This included scuttle crab skins, custom sucked into a star death animations, destroyed ground textures and the Dark Star itself! It’s fantastic being surrounded by such passion at Riot. Everyone wants to make the best thing possible for players!

We’re super excited to explore more brave new frontiers like Dark Star: Singularity in the future. Sometimes they’ll be much lower scope, and sometime they’ll be on the scale of Dark Star, but we’ll be challenging our own preconceptions on ‘how to have fun in League’. Our goal still remains to have as much cool new stuff for everyone to play in League as often as possible. Keep an eye out for more experimental stuff from us. 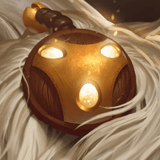 Rabid Llama
Associate Technical Game Designer
Luke Rinard
Rabid Llama is a Game Designer on League of Legends. After making two cosmic champions, he felt like he needed to make a cosmic game mode, too. 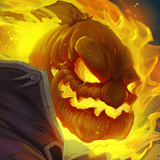 RiotVitzkrieg
Art Lead
Brendon Vitz
RiotVitzkrieg is a Tech Artist turned Art Lead, but what the internet really cares about are his two Corgis. When he's not playing games he's probably sleeping... or working.
Next Article