When we kicked off development for Xayah and Rakan, we looked over our champion roster and quickly realized we hadn’t done any animal-influenced humanoids in a while. But, despite the number of these creatures already present in League, we also didn’t even have a name for that sort of thing.

Every champion team, which we refer to internally as a “pod,” has a Narrative discipline member. And part of that team member’s function is figuring out the new champ’s theme and how they fit into Runeterra. When creating a non-human character, there’s an additional question: How does this creature, specifically, fit into the world?

Figuring out what this race was soon became a major question for Narrative writer Matt “FauxSchizzle” Dunn and myself. Raising the stakes, early in production our product owner became excited by the prospect that Xayah and Rakan’s race could help explain some of our earlier champions (including Ahri, Wukong, Rengar, and others) to give those older champs a clearer place in the modernized Runeterran world.

This seemed like a great idea and an easy fix…well, until we sat down to do it.

Ahri, Wukong, Rengar? Obviously, they have classical real-world myths they relate to—but what exactly are they, and what are they in Runeterra? And how do we “change” them without destroying what players already love about them?

Research is always the first step. We started by looking at player perception of these champions, the myths the champs related to, their old lore, and their visuals. Quickly we found five common themes.

One, the “beastman” champs were usually from a borderland, often just beyond the areas of civilization. Two, many had the potential to have changed shape or manipulated their appearance because of magic. Three, they usually had some sort of innate magical power. Four, most seemed to have a “natural form” of magic. And five, Ahri, and others, were from Ionia—or at least had elements in their lore that could be perceived as Ionian.

So what logic supports the existence of a group of shapeshifting, humanoid-chimeric, Ionian-based, natural magic using creatures?

The Logic of Natural Magic and Shapeshifters

Going back to Tahm Kench, we had been working with the notion that part of Runeterra’s magic related to the spirit world seen in Shen’s lore. This was a mirror world where the spirit of every living thing and every of type of thing exists. The souls of every person, the spirit of animals, the essences of species and of locations, elements, and even ideas exist in that dimension as powerful forces, which interact and create a type of magic in Runeterra. Furthermore, we knew the spirits from this place were not truly restricted in form. Tahm Kench and Kindred are not of our world—their appearances in the material realm are illusionary. They are creatures of pure magic who manifest under specific rules, but do not have a true shape or physical body like we do.

Matt and I checked over with Anthony “Ant in Oz” Lenné and the Worldbuilding team, who helped a lot with two key concepts. Firstly, Anthony was working on early development for magic in Runeterra, including the notion that it could possibly flow like rivers from a series of portals. These streams of magic (or ley-lines) then trace across the planet, intersecting and mixing. It was a great piece of worldbuilding because that single, simple rule could allow a lot of complexity to spring from it. Areas near a portal would have access to a massive amount of a particular type of magic, but little variety, while other regions at the intersections between different streams would have their own curious forms of magic. Other regions located far from the streams could be nearly barren of magic. Although this was just a work in progress, it inspired us to think more specifically about what this concept of magic could become.

There was also the idea that some of the most powerful magical “springs” sprang from Ionia’s highlands. Thus it seemed obvious that Ionia could be an abundant source of this type of “natural magic” which flowed from Shen’s spirit world and into the material plane. If creatures like Ahri, Xayah, and Rakan were from Ionia, then it was likely they had a deeper connection to this particular magic—and thus a deeper connection to that natural spirit world.

This gave us a couple of solutions. We already knew magical places like Icathia were ravaged and changed by magic—we could now presume that Ionia had its own border with a slightly less dangerous magical realm.

As the art developed, it seemed like our creatures were thematically someplace between elves and satyrs. They were a half-fey race—which contained features from three creatures (human, avian and canid) and came from the borders of Ionia to this magical spirit world. But if these creatures weren’t just magic spirits and they weren’t just humans with Star Trek ears, wouldn’t there be a missing link between the creatures of that world and ours?

One of the problems in creating a new race is evolution. It’s a fundamental concept and a subconscious lens we (as media consumers) use to see any organized worldbuilding. It’s easy to ignore it with creatures that are supposed to be purely magical (like demons and ghosts) but it’s hard to ignore the illogic of some classic monsters and races that are supposed to be physical creatures that developed within that world.

Many IPs simply avoid these questions or resort to a simple Deus Ex Machina (uh… Titans made them!) Both of those solutions seemed like cop-outs, and if we want League’s lore to be taken seriously, we needed to approach it seriously.

But what if we could get evolution to work for us instead? What if magic was a resource (like water) and its scarcity or abundance affected evolution? Could that also explain why a shape-shifter is a shape-shifter?

A variety of ideas began to develop, but one took hold as useful for development. If we could assume there were permeable borders between the material world of Runeterra and the natural spirit world, then it’s likely creatures would evolve who could flourish in both realms. These creatures’ souls would have to be more fluid and changeable than ours—they would need to be able to absorb and merge with other magical spirits to survive for any extended periods near the spirit worlds. Yet they would also need a real physical form to survive times when they were in our world.

These things would be as foreign to us as the deep-sea jellyfish or the giant tubeworms from the pelagic zone. They were the “proto-vastaya,” or what the Worldbuilding team would come to call the vastayashai’rei. This ancient race of true shape-shifters uniquely adapted to this dangerously strange environment.

The vastayashai’rei gave us an evolutionary bridge for magic to enter and be used by other living beings (and an underlying logic that could potentially be used with other magic types). Obviously wizards could still study magic and people could be touched by it in other ways, but we could now assume that interpersonal contact with this ancient race (or perhaps even brief contacts with these spirit-borders) would, like a virus, begin to rewrite the way that creature or its progeny interacted with magic. This solution worked. (BTW check out the Universe Page for more detailed and cool vastaya lore!)

Suddenly we had an explanation for a metric ton of classic, weird monsters. Unintelligent animals could become or evolve into griffons, and other chimeric creatures, as their physical form was affected by their access to magical energy, and different spirit animal magics would begin to change it—and its progeny’s—form. 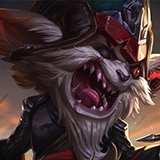 WAAAARGHbobo
Narrative Writer
Odin Austin Shafer
Odin is a writer on the champion team and is fueled by coffee and rage...mostly coffee. Lots of coffee...Did I mention coffee?
Next Article