As the free agency market continues and teams prepare for the 2017 season, we’re seeing a few incorrect assumptions and accusations regarding poaching. In this article, we wanted to give some clarity around what poaching is and when it can occur, as well as address some concerns and allegations that have been raised this offseason.

While teams may be signing contracts before the League receives documentation, poaching protections are explicitly NOT put in place until the League approves of the acquisition and has received the proper documentation. This is to prevent teams from claiming poaching protection despite signing potentially fraudulent or noncompliant contracts; we want to make sure that we are only recognizing valid, proper contracts.

To provide an example of how this works, let’s take a recent example: Adrian’s signing by P1. P1 negotiated a deal and signed a contract with Adrian, but before documentation had been submitted, Adrian was also approached by other teams, including Echo Fox. This contact by other teams was entirely permissible; until documentation was submitted by P1 (which has since been sent in), the League considered Adrian to be a free agent. As such, Echo Fox was not guilty of poaching here, and acted fully within the boundaries of LCS rules. If any communication with Adrian occurred after the Database was updated, however, that would be a violation of League policy. All previous rulings where teams have been found guilty of tampering/poaching have involved players with valid, League-recognized contracts.

We encourage all teams to consult the Global Contract Database before reaching out to any player directly. If any teams/managers have questions about a player’s contract status, they should also feel free to reach out to their local League Ops official.

Chris “RiotChopper” Hopper is one of the International Esports and League Operations Leads. His team is focused on the global development and operations of competitive League of Legends. Chopper is a sports fanatic who wins (almost) every Fantasy League among the Riot esports team and always cheers for his alma mater, Duke. Questions or want to chat about Magic: The Gathering? Reach out to him on Twitter via @RiotChopper. 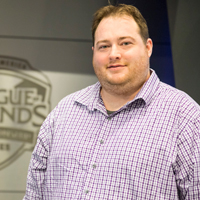