It’s been about four weeks since Little Demon Tristana began production. In our last update, we shared why we chose Tristana for this round of voting, some of our VFX explorations, and an early look at her splash art.

At the same time all of that stuff was happening, other members of our team were busy working in parallel—but we didn’t want to write a 10,000 word essay on skin dev! (At least, not all in one post… ) Today we’ve got new stuff to share about her character model, rigging, animation, VFX, and SFX. Let’s jump in.

Trevor “EdBighead245” Carr, Senior Character Artist: The model for a skin or champion is basically the character you see in game. It’s made up of a bunch of polygons with textures wrapped around them. Making a character model is a bit like digital sculpting, with a bunch of techy stuff mixed in to get the sculpture to work in the game engine.

Traditionally, character modeling begins after the concept art is complete, but on League, we usually start helping out before the concept is completely locked. Most of the time that means we sew pieces of older character models together to see how the concept might work in the game. We want to make sure the 2D drawing won’t run into any issues when it’s moving around in 3D, like clipping (which is where one part of the character passes through another) or other things that don’t look right from League’s top-down camera angle.

We call this first hodge-podge model a proxy. For Little Demon Tristana, we frankensteined her proxy using her base skin’s face, Demon Vi’s horns and hair, the body and gun from Omega Squad, and some wings and a tail from Little Devil Teemo.

After the team is sure the idea is going to work, the real fun begins! I sculpted Tristana’s concept in 3D using the program Zbrush to get all the main shapes in and to get the essence of the design translated into something that you can turn around and look at from any angle.

This is as close to real sculpting as we get, since these programs use millions of polygons to simulate a surface that can be worked like clay. This is also the time I get to ask the concept artist what the heck they were trying to show when they scribbled in some shapes they thought no one would see—like Tristana’s spiked belt that was previously covered by her hand.

There were some things about Tristana’s outfit that weren’t all that fleshed out, so I took a few ideas from the early splash layouts and from Demon Vi’s original skin (since it was pretty sweet), and I made up a few of my own. Once the team felt like the essence of Little Demon was fleshed out faithfully, it was time to move on!

The final model sculpt has way too many polygons for our game engine, so we need to optimize it and make the final in-game mesh. When we “retop” a model (which is short for “retopologizing”), we rebuild a new mesh on top of the one we originally sculpted. This new mesh is our final “low-poly” model, and it’s what you’ll actually see in the game. For League, these low-poly meshes are made up of around 7,000-10,000 triangles. It’s like tracing in 3D! I draw the low-poly mesh on top of the high-poly sculpt.

When creating this mesh, it’s important to think about the character’s silhouette. I want to have enough polys so that all of the curved edges feel smooth from the in-game camera distance, but not so many that a potato computer will choke and die trying to render it, since the game engine (and your graphics card) are thinking about all the points in this mesh in real-time, every single frame! I also worry about animation, since each joint needs enough polys to be able to bend properly without breaking or looking goofy.

I’m still working on her texturing now, so next time we’ll have more to share about her character modeling. (But for a preview, you can check out the videos later in this post!)

Moonyoung “ANDMoonY” Oh, Technical Artist: At first, a champion or skin’s character model is still and lifeless, kind of like a doll. For Tristana, I helped turn that motionless model into a real demon yordle, with bones, joints, and controls that our animator can then use to create her movement. This process is called rigging.

All rigs are made of components, which are like blueprints containing codes for the joints and controls of common character features. These components are basically body parts; there are components for arms, legs, spines, wings, and so on. Tech artists use these existing components to build new rigs for champions and skins. Basically, we tell the program to put to arms there, a head here, a spine there… then the program uses the scripts attached to each body part to create a unique rig.

Sometimes we need to create new components when there’s something new to rig, which is exactly what I had to do for Little Devil Teemo’s tail! (Yes, I’m the father of the Little Devil himself… ) For Tristana, I was actually able to use the tail component I built for Teemo, which can help animate tails and capes much faster automatically. When I tested the setup, Tristana’s tail was a little too “sticky,” so I adjusted it using the tool, which made her tail’s movement more “soft” and natural-looking.

Einar “Riot Beinhar” Langfjord, Associate Animator: As an animator on a skin you are responsible for the movement and the personality of a character. It’s very important that the animation of a character reads easily and feels good to play. One of the most noticeable animations we make for Epic skins is the recall animation; it’s a great way for us to showcase what makes the skin special through a story beat. But we’ll talk more about the recall next time since I’m just getting started on it!

As animators, we also look for opportunities elsewhere in the skin to add some extra animation flavor to the character without changing it so much that it feels very different to use. We saw some cool opportunities for some unique animations for Little Demon Tristana. For this skin, we focused on a new animation for her fiery hair, a custom fly animation when she uses Rocket Jump, and giving some life to her tail.

For her W, we knew we wanted to include her wings somehow. What’s the point of having spooky bat wings if you’re not planning to use them? We started looking at options for how Tristana would land after her jump: Does she use the momentum of the air to dunk her gun down as she lands? Or maybe she dives face first into danger, asking questions about if that was a good idea later!

We went with the face-first dive bomb because we felt like it embodied the spirit of Little Devil Tristana the most, plus it secretly embodying the spirit of “Solo Queue hero mode.”

We also took a look at Tristana’s hair animations. I know, that sure sounds exciting! Let’s up the stakes a bit: What if the hair was made of DEMON FIRE? How would this fire hair move compared to regular, boring normal hair? We first have to research fire a bit. Fire can be very erratic and aggressive; even flames in a fireplace can be pretty wild and exciting.

The problem with this type of fire is that it can be very distracting in game. So many elements in the game are fighting for your eyes’ attention already. We want players to focus on what’s happening on the battlefield, not on Tristana’s explosive hairstyle, so we have to dial her animations back a fair bit. A burning candle seems more up our alley, keeping the hair feeling constantly alive, but not so distracting that it steals players’ attention. Here’s where we’re at currently.

A Song of Screams and Fire

Alison “semipriceysoap” Ho, Sound Designer: Hello! I’m semipriceysoap, Tristana’s sound designer. Tristana’s Little Demon concepts provided a challenge as her gun is a creature that breathes fire… which is something her Dragon Trainer skin also includes. However, seeing Sirhaian’s spectral VFX and reading through initial reactions from all of you to the Little Demon announcement, many people seemed to crave a more hardcore and aggressive Tristana. Dragon Trainer Tristana’s gun leaned into the cutesy nature of Riggle, so this gave us some room to explore fire from a darker and spookier direction.

These are some of the raw screams and breaths we previously recorded for Little Devil Teemo and other projects:

I then combined them with library sounds of fire and animal vocals and put it through some processing, which gave me this:

I’m using this and other spooky sounds to build out Tristana’s kit. You can hear her work-in-progress sound effects in the video below, in addition to the direction we’re heading for her VO processing (more on that next time!).

Kevin “Sirhaian” Leroy, VFX Artist: We’ve refined and polished Tristana’s VFX! Everything is still WIP, but we’re liking the direction of the spirit fire, so I’m going to continue polishing it up until the end of production. So far I’ve added more soul effects and replaced the Teemo bomb with something more easily identifiable and less noisy (the soul orb). I’ve also started adjusting the colors over her whole kit, trying to differentiate her projectiles to make sure her basic attacks, crits, Q, E, and R all read as their own unique effects. There’s also some new VFX on her wings in the W jump, runes in her R, and more details overall!

Here’s a preview of the current in-game state for Little Demon Tristana:

We’ll keep polishing the kit until we feel like it’s good to go, and we’ll also have her recall VFX to make.

At this point, you’ve seen a lot of the work that goes into making a skin! *whew* But we’re not done. We still have to finish up her recall, sound design, splash art, and all of the other things needed to wrap up a skin—like QA, localization, publishing, PBE launch, post-launch surveys, and more. In the next post, we’ll be sharing more about Little Demon Tristana’s SFX and VO processing, plus we’ll have an update on her animations and character model.

But before we go… remember the splash art thumbnails from the last update? We heard that “little edgelord of hell on a throne” was the overall favorite, so we’re moving forward with that design. Thanks a lot for all of your input so far—we’ll be listening to your thoughts until the end of development, so keep ‘em coming! 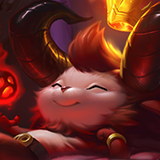 ANDMoonY
Technical Artist
Moonyoung Oh
ANDMoonY is a technical artist on League. He is the father of Little Devil Teemo, and he likes to have enthusiastic dance sessions at work.

semipriceysoap
Sound Designer
Alison Ho
Semipriceysoap is a sound designer on the Skins team and costs approximately $6.00.
Next Article