We asked you which Tristana skin you wanted most, and after over 4 million votes around the globe, the winner is…

We had to know: Did the hardcore Tristana mains who’ve mastered the art of Rocket Jumping into battle choose the same skin? The results were unanimous.

NUMBER OF GAMES ON TRISTANA

When we were initially coming up with the concepts for the Player Choice Tristana skin, we worked with our concept artist Jesse Li to design three options based around beloved themes. We wanted a “fun” skin, a “sci-fi” skin, and then asked him to create the third choice based on what he felt Tristana needed.

We usually kick off all new skins with a  product brief. This super glamorous document has a logline (like a slogan), pillars, and creative goals. We make this so everyone on the team knows where we’re headed and so the artists can feel empowered to flex their creativity within that sandbox. We like to have this document before we enter pre-production—the concept and exploration phase—but for this skin, we had the art first and needed to wait for the results of the vote before we could start production.

Once we knew the winner, we got started on production right away.

Our pillars for Little Demon Tristana (her code name) are the following:

Our next step is to have a “blue sky” meeting where we talk about all the good, bad, and insane ideas for a skin. We can’t possibly do all of them, but we like to let people go a little crazy since it might unlock a great idea. I personally call these meetings “grey sky meetings” because I’m the kind of producer that likes to be realistic, so I’m that rain cloud on your parade. ;)

About half of the Little Demon Tristana team, getting ready to start our first meeting.

As you can see, there are some crazy ideas on the board. Some are awesome, some are questionable, and some conflict with each other. And that’s okay!

White board from the blue sky meeting. It’s possible none of these things make it into the game—it’s just an early brainstorm!

Next we’ll test out some of the ideas that we love but aren’t sure how they’ll look in game. Sometimes there are amazing ideas that look great as 2D concepts but unfortunately don’t translate into the game very well. As a product manager, I’m accountable for the final skin, so that means part of my job is finalizing what features make it (and which don’t). I make this decision collaboratively with direct input from the team, art and craft leads, delivery leads, engineering teams, marketing, and any partner teams (such as the winning team in the case of World Championship Winner skins).

From the blue sky, we usually start exploring ideas. Here’s a sneak peak from next week’s update: some exploration from Riot Sirhaian on possible VFX routes!

We know that Dragon Trainer Tristana has red fiery effects, and we want to make sure Little Devil Tristana is unique but also cohesive with Demon Vi, an older skin in this thematic. This is why we’re exploring magenta “demon fire” effects as well as blue “spirit fire” effects (and a few others)—let us know what you think of these explorations in the comments below!

Join Us Next Time

We’ll be back on Nexus every two weeks with updates on our progress, which will continue until the skin is scheduled to launch in patch 9.11. In our next update, Riot Sirhaian will go deeper into what we think about for skins VFX, and we’ll also take a look into the splash creation process. Thanks again to everyone who voted! We’re really excited to work on this together with you. 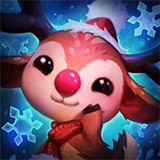 Riot Stellari
Product Manager
Janelle Jimenez
Stellari makes skins in League of Legends. She is the mother of Pug’Maw.
Next Article